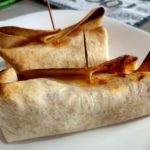 Not sure whether to have pizza or burritos for dinner on the weekend? With Lucia’s recipe, the arguments are over. Its baked burritos with tuna will conquer both lovers of Italian cuisine and those who prefer Mexican cuisine.

Lucía confesses that this dish was the result of chance, since initially she planned to prepare some tuna dumplings, but when she had the filling prepared and the oven preheated, she realized that the wafers she had in the fridge were in poor condition. Therefore, she decided to take some Mexican tortillas (he usually has a package at home) and prepare some tuna burritos. Since she had already turned on the oven, she decided to add cheese and heat them, as if they were a pizza. That’s how their tuna baked burritos or pizzaritos were born.

Sounds great to us, so let’s get down to business preparing these original pizzaritos or burritos in the oven. Bon Appetite!

An original and very appetizing recipe. Thanks, Lucia!

If you like this recipe, you can make it at home with the yellowfin tuna available in our online store.